In Supervised Learning, we know the possible outcome. We adequately provide historical data to the standard algorithm and get the desired result. We trained the model on a labeled dataset. The labeled dataset means we have both input and output parameters.

Image Classification represents a classic example of Supervised Learning. The algorithm trained enough to identify the image accurately. When the user provides the image to the system, based on its data, it will recognize the type of image.

Say, there is data available on used car prices. Since the data is labeled (available output value corresponding to each set of input values) we need to develop a learning model to train on this data to know the right answers (correct output value) for the new set of input. The aim is to predict the selling price of a used car based on the number of kilometers it has completed. 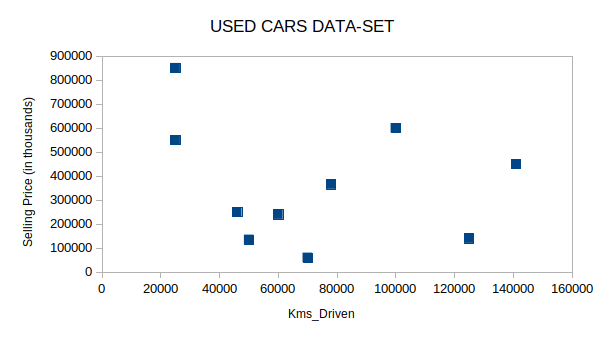 The X-axis represents the number of kilometers the car has been driven and the y-axis represents the corresponding selling price of the vehicle. We need a learning model that predicts the correct price of the vehicle for a new input after training on this data. The value to be predicted is a continuous-valued output. Such types of problems is referred as Regression Problems.

Now, suppose we make a line fit into this data-set corresponding to our training model to make predictions or we can fit in a curve(non-linear functional form) to increase the output proficiency. This choice is statistical and shall be discussed later in the course. As we see in the above figure, a red straight line and a green quadratic curve fit into the data-set in such a way that it covers most of the data points. We can predict the response of our model on a new set of inputs based on these curves. Suppose, we need to know the selling price of a used car that had run 40,000 km. According to the first learning model i.e. linear, the selling price of the car will be Rs. 200,000 while according to the parabolic curve, the selling price of the car will be Rs. 400,000. Which of them is correct? It depends on the calculated efficiency of our learning model on the training data.

Now, if we have the data in which the output value is finitely categorized or is the set of discrete values then such type of problems are referred to as Classification Problems. They are most prominently dealt with, in the real world.

The learning problems in which, based on some attributes or input features, if we need to predict whether a patient suffering from Covid-19 can have a lung collapse or not in the future or if we need to predict the digits written on the driving plate of a car or to enable a machine to ratify the distinction between an aeroplane and a helicopter. Each of the above is a typical classification problem as the output being predicted contains a discrete set of values.

The image below shows the data of the patients who had heart failure depending upon the platelet count. There can be many attributes that suggest the reason for the heart failure but for the sake of understanding easily on a 2-D surface we are focusing on a singular attribute for now i.e. platelets count.

You can access the Heart Failure Dataset(with one attribute) from below:- 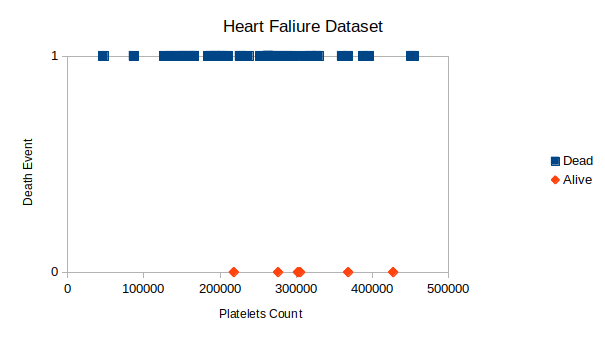 Blue Dots shows the patients who had a heart failure corresponding to the value of platelets count on the X-axis whereas orange dots suggests people who didn't suffer heart failure. This is a classification problem because we have only two classes of values as output labels i.e. Heart Failure (1) and No Heart Failure (0). Supervised Learning is a type of machine learning in which for each observation of input attribute(s) there is an associated value of response (output) recorded that is used as a data to train the learning model.

As the name suggests supervised, it means there is a supervisor under whose guidance the process of learning undergoes. Imagine a computer as our student whom we as a teacher/supervisor wishes to teach what a boat will look like. We show it various pictures that are of the boat and also those that are not the pictures of a boat, maybe of a plane, car or even a submarine. We allow it to distinguish a boat from other objects through the initial experience of learning that it gains based on the data we provide it. Variable represents data and hence can be characterized as either Quantitative and Qualitative(or Categorical). Quantitative Variable takes on the numerical values such as weight of a person, the height of the building, income, etc. On the flip side, Qualitative Variables contains a P many discrete set of categories or classes such as the color of eye (back or brown), job Grade (A, B or C), heart disease (yes or no), etc.

As we have discussed above with the help of examples it must be quite clear to you now that supervised learning is divided into two types of problems i.e.,

Now, there are numerous amounts of supervised learning algorithms available, thanks to the long years of diligent research. There are classical historical methods and also the modern ML techniques work efficiently on complex humongous datasets. Let's briefly discuss each algorithm that we will be scrutinizing in a later course.

In the upcoming articles, we discuss all algorithms in detail.